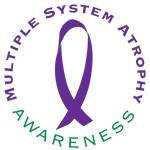 The emblem on the left was designed to bring awareness to MSA ( Multiple Systems Atrophy).

Want to raise awareness for MSA? Become a FAN of “MIRACLES FOR MSA” on FACEBOOK and invite all your friends!

Please Join this band of strong MSA patients and get the information out there.

ANYWHERE, U.S. (Feb. 23, 2011)—There are no Hollywood celebrities linked to MSA (Multiple System Atrophy)—just more than 2,300 fans known on Facebook as “Miracles for MSA,” whose goal is to draw attention to this rare, currently incurable disease. With that in mind, this group has designated March as Multiple System Atrophy Awareness Month, in order to increase public awareness and encourage research activities worldwide.

Multiple System Atrophy is a neurodegenerative disorder that affects many of the autonomic body systems that people take for granted. The symptoms can occur in any combination, from loss of balance and coordination, fainting and dizziness due to severely low blood pressure, bladder and bowel issues, speech and swallowing difficulties, sleep disturbances, breathing problems, and rigidity and tremors similar to Parkinson’s disease or ALS.

“We all worked hard in our jobs and now we have to work hard to keep ahead of this disease that destroys,” said MSA patient Gene Rechsteiner, of Bakersfield, California. “My hopes are to bring awareness and educate people on how bad MSA is and finding funds for research to find a cure. The medical society needs to realize that for each MSA patient, there are at least a dozen doctors in different fields that will be treating that patient: Primary, neurology, urology, speech, PT, OT, pulmonology, fitness trainer, caregivers, just to name a few. MSA sucks. You lose your independence along with your health. There are only a couple of hours in the day that I am able to function safely. The rest of the day I have to nap, watch my blood pressure. MSA took my career. We cannot stay safely in our home. And now it is eating into our retirement. My wife no longer works in order to care for me 24/7. But we cannot give up hope.”

Previously known by such names as Shy-Drager Syndrome, sporadic olivopontocerebellar atrophy and striatonigral degeneration, MSA is not considered to be hereditary. It generally affects middle-aged men and women, advancing rapidly, with progressive loss of motor skills, eventual confinement to bed, and death.  It is very rare for someone to live 15 years with MSA. There is no remission from the disease and currently no cure. The current lack of awareness of MSA leads to misdiagnosis and mistreatment, as well as misdirected research funding that could be better applied to the MSA effort.

Appoximately 50,000 Americans are now reported to have MSA (possibly more). A recent epidemiological survey, reported on the European MSA Study group website, has found MSA to have a prevalence rate of 4.4 people per 100,000.

Those are the clinical facts of MSA. But they don’t begin to address the havoc the disease wreaks not only on patients but also on family members, caregivers and friends, who watch their once vibrant loved one gradually lose all those abilities once taken for granted. It is the goal of all those who have been affected in some way by this disease to draw attention to it, not only during March but also throughout the year.

“Novel research to diagnose this debilitating illness sooner and to separate it from Parkinson’s and other disease is critical for creating a better future for MSA patients,” said Dr. Anna Langerveld, who owns Genemarkers of Kalamazoo, MI. “An important first step was taken in 2009 with a pilot study to define a genetic signature of MSA in patient blood samples. The initial work was a collaboration between Genemarkers, Dr. Charles Ide of Western Michigan University and Dr. David Robertson of Vanderbilt University Medical School. Efforts have begun to design and fund a new study to extend and improve these findings. Success will require continued scientific and financial participation from all interested groups. Our passion and the data generated in the ongoing work will expand awareness of MSA, draw more scientists and physicians into our efforts, and begin to bring hope to MSA patients and caregivers.”

If you wish to submit this to your local media – copy and or change with your own story as well as your cantact if you wish.