MSA is a rare neurodegenerative disorder that has no cure. It causes the progressive loss of motor skills, unlabored breathing, speech, and other basic functions, ultimately leading to death. People with MSA typically live only six to ten years after the first signs of symptoms. It affects approximately 4.6 individuals per 100,000 world wide.

Though little is known about the disease, it is not a black box. According to the National Institute of Neurological Disorders and Stroke at the National Institutes of Health, MSA symptoms are caused by the slow death of nerve cells that control many of the functions that were previously done automatically or with little effort, like breathing or walking. It is possible that the nerve cells die because of an accumulation of a protein in the brain and spinal cord called alpha-synuclein. Alpha-synuclein accumulation is also thought to play a role in other neurological diseases like Parkinson’s disease. This important but basic knowledge is not enough.

The first step in accelerating research into MSA’s causes, potential treatments, and a cure is to raise public awareness.

Expressing support for designation of March 2016 as “Multiple System Atrophy Awareness Month” to increase public awareness of this progressive neurodegenerative disorder that affects the autonomic functions of the body.

As many as 3,000 more patients in Australia with Multiple System Atrophy are misdiagnosed with other more recognizable neurodegenerative disorders;

Patients with Multiple System Atrophy lose the ability to walk, talk, chew, swallow, and even breathe over the course of a few years;

The incidence of Multiple System Atrophy in Australia has increased in recent years;

No specific risk factors or causes of Multiple System Atrophy have been identified;

There is currently no cure for Multiple System Atrophy;

The lack of awareness about Multiple System Atrophy has hindered research and the ability of researchers to obtain funding for their work;

Public support and greater awareness of the need for research funding can aid in the discovery of the cause of and a cure for Multiple System Atrophy. 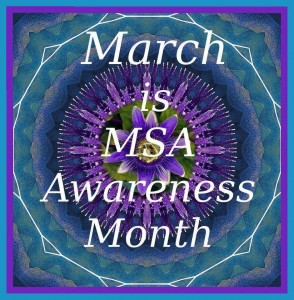 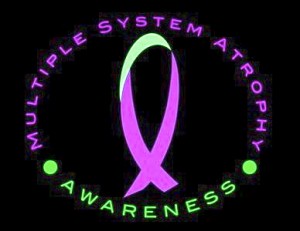 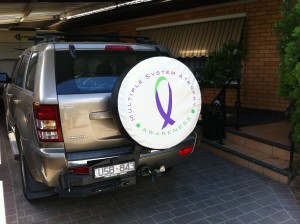 Wheel cover on back my Jeep

This entry was posted in MSA AWARENESS. Bookmark the permalink.